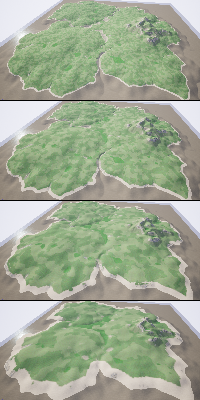 You should start from watching this video with details on world size and scale:

The world above sea level from the “Open World Bakery” point of view is a cube with the side of 1.0. Additionally there is a -0.01-height space beneath the ocean level space below, so effective height is 1.01 and it is stretched from -0.01 to 0.1.

When you position the hill at 0.5:0.5 it is going to be right in the middle of the map. And if this hill has a height of 1.5 it will be cut so it will have a plateau at the level of the world roof, which is 1, so about a third of the height will not be there.

The important consequence of this is that the landscape does not exactly “scale” when you bake it. Beach is expected to be, for example, 4 meters/voxels wide. So it is defined in absolute units. While terrain blocks are defined in relative. This 6-voxels-wide beach could be 0.024 in the relative space, or it could be 0. 0.0015. Same is even more true for water- and erosion-related processes. Erosion is calculated in absolute space, so one voxel produces, say, 1.0 water. If above the target voxel there is a slope of length 0.02 that could mean this voxel will get a stream of power 52 or of power 410. Which will, obviously, wash more soil etc. etc.

So you can see this process in action in the video above and on the following HiRes pictures (same landscape baked in 4 different resolutions):

Generation of the terrain follows this order:

Generally all the heavy stuff lives in C++, all the setup and top-level manipulations are exposed to the Blueprint. This is true for general-purpose code, like default errosion sequences and example terrains (introduced as Blueprints) as well as for Editor-specific code (most editor-related logic is implemented with blueprints).

So, most things you would want to customise/use are implemented as blueprints. All hardcore stuff exists as C++ only, thou C++ is quite clean and -organized the way that it is easy to understand and to use.

In fact, all Open World Bakery functionality (except for async execution, which is generally unavailable in Editor at a moment) is available both in runtime and in Editor. You can explore OpenWorldBakeryLandscapeBrush blueprint to see, how to work with Bakery in editor, and you can open example projects to see some examples of Bakery usage with different mesh providres.